This is just to confirm – if you weren’t already convinced – that Bad Hair Days are real and affect not only our appearance but also how we feel, work and socialise.

According to a
study conducted at Yale University, “bad hair days” are real — the perception
of bad hair actually produces negative consequences beyond not feeling good
about how one looks.
According to the study, directed by Dr. Marianne LaFrance, Professor of
Psychology and Professor of Women’s and Gender Studies at Yale University,
“bad hair days” affect individuals’ self-esteem increasing self-doubt,
intensifying social insecurities, and becoming more self-critical in general.
“Interestingly, both women and men are negatively affected by the
phenomenon of bad hair days,” says Professor LaFrance.  “Even more fascinating
is our finding that individuals perceive their capabilities to be
significantly lower than others when experiencing bad hair.”
The research was designed to test the cause
and effect relationship between having “bad hair” and experiencing negative
psychological consequences.  Specifically, the study uncovered important
findings across three psychological measures: reduced self-esteem; increased
social insecurity; and a diminished sense of being a worthwhile person.

Bad Hair Lowers Self-Esteem Regarding Performance
A person with positive performance self-esteem is an individual who is
confident and optimistic that he or she is on top of things, understands what
needs to be done and feels capable about being able to pull it off.  According
to the study, the perception of bad hair leads to a reduced sense of
performance self-esteem, such that men and women doubt their capabilities and
may ultimately perform below their level of competence when experiencing a bad
hair day.  Most notably, just the thought of a bad hair day caused both men
and women to feel they are not as smart as others.  Surprisingly, the impact
on performance self-esteem was more pronounced among men.

Bad Hair Increases Social Insecurity
The study further found that bad hair intensifies feelings of social
insecurity and self-consciousness.  However, the psychological reactions
differed among women and men.  Women tend to feel more disgraced, embarrassed,
ashamed or self-conscious when experiencing bad hair.  Men on the other hand,
feel more nervous, less confident and are more inclined to be unsociable.

Bad Hair Intensifies Self-Criticism
Evidence shows that bad hair causes one to be more negative about oneself.
Specifically, results indicate that a “bad hair day” leads individuals to find
more personal character flaws that go beyond their appearance.  When asked to
complete a list of statements about who they are, “bad hair” caused people to
mention significantly more negative traits and attributes.

So I hope you are having a Good Hair Day! 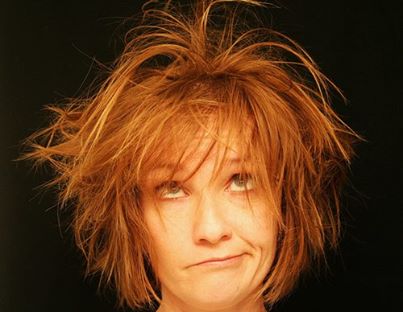