Scalp problems are common and occur for a number of reasons. The scalp’s micro-environment, with its large hair follicles and plentiful supply of sebum, and the relative ease with which this can induce elevated levels of micro-organisms and associated scaling, is frequently a primary cause of scalp disorders.

Another major factor is the infrequency in which some people wash their hair/scalp. They may take a shower every day but only wash their hair/scalp twice a week. Clearly this differential in cleansing from one region of the skin to another is likely to have an effect on the least washed area. Dandruff and other scalp disorders affect over 50% of all adults at some point during their lives. The most common cause of these problems is a micro-organism called Malassezia furfur (formally known as Pityrosporum Ovale). This fungus is always present on the scalp but when the level of sebum increases (sebum is composed of fatty acids which acts as a food source for the fungus) and/or there are minor changes to the composition of sebum due to ill health, diet, stress, hormonal changes and other factors, then conditions improve for the proliferation of the Malassezia furfur fungus resulting in scalp itching, flaking, inflammation, spots, dandruff, seborrheic dermatitis and other problems.

Another causative factor in scalp problems is the rate at which the skin cells form. These cells begin to grow from the base layer of the epidermis and gradually move to the surface of the skin. The epidermis, or outer, protective layer of the skin, is constantly changing. This whole process is called the epidermal turnover. Normally it takes approximately 28 days for the cells to move through the skin to the surface, where they come away when we wash or remove our clothing (much household dust is composed of dead skin cells) but with dandruff and other scalp problems the formation of skin cells is faster than normal, with the cells taking perhaps only 12 to 15 days to reach the surface of the scalp rather than the usual 28. If this is accompanied by an increase in the quantity of sebum which acts like a cement to bond the microscopically small cells together, then flakes, visible to the naked eye, form and we see this as dandruff. In addition to this are other factors which improve the conditions under which the fungus can increase.

With scale on the surface of the scalp comes an increased surface area, so increasing the space available for greater numbers of micro-organisms. This increased volume of dead skin cells absorbs more water (sweat) so allowing the fungus to multiply in this warm, moist scalp environment. 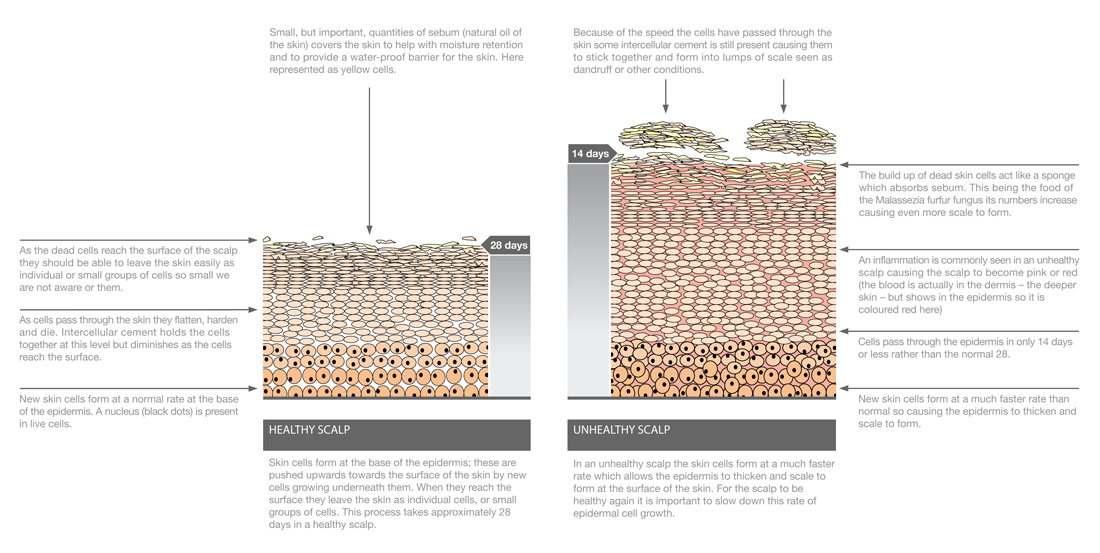